EllaOne is a female emergency contraceptive pill to be taken as soon as possible, but no later than 120 hours, after unprotected sex or a contraceptive failure such as a tear in a condom during sex. If the woman vomits within three hours of taking the medicine she should take another tablet. EllaOne can be taken at any time during the menstrual cycle.

How does ellaOne work?
For pregnancy to occur there has to be ovulation (release of eggs) followed by the fertilisation of the egg (fusion with a sperm) and implantation in the womb. The sex hormone progesterone plays a role in the timing of ovulation and in preparing the lining of womb to receive the fertilised egg. The active substance in ellaOne, ulipristal acetate, acts as a progesterone receptor modulator. This means that it attaches to the receptors that progesterone normally attaches to, preventing the hormone from having its effect. Through its actions on the progesterone receptors, ellaOne prevents pregnancies mainly by preventing or delaying ovulation. 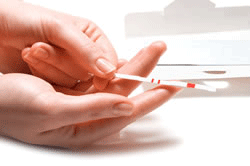 How has ellaOne been studied?
In one main study, ellaOne was given to 1,533 women (aged on average 24 years) who had requested emergency contraception between two and five days after unprotected sex or contraceptive failure. The main measure of effectiveness was the number of women who did not become pregnant. This number was then compared with the number of women who would have been expected to become pregnant if they had not taken a contraceptive. This number was calculated from published pregnancy rates. An additional study compared ellaOne with levonorgestrel (another medicine used in emergency contraception). This study included women who took the medicine within two days of unprotected sex or contraceptive failure.

What benefit has ellaOne shown during the studies?
EllaOne was effective as an emergency contraceptive, reducing the number of unintended pregnancies. Of the women who completed the main study, 2.1% (26 out of 1,241) became pregnant. This is less than the 5.5% of women who would have been expected to become pregnant if they had not taken any contraceptive. EllaOne therefore prevented about three-fifths of the pregnancies.
The additional study, which included women who took the medicine within two days of unprotected sex or contraceptive failure, supported the effectiveness of ellaOne. In this study, ellaOne was as effective as levonorgestrel at preventing pregnancies.

What is the risk associated with ellaOne?
The most common side effects with ellaOne (seen in more than 1 patient in 10) are headache, nausea (feeling sick) and abdominal pain (stomach ache). For the full list of all side effects reported with ellaOne, see the package leaflet.
EllaOne should not be used in women who may be hypersensitive (allergic) to ulipristal acetate or any of the other ingredients. It must not be used in women who are already pregnant.